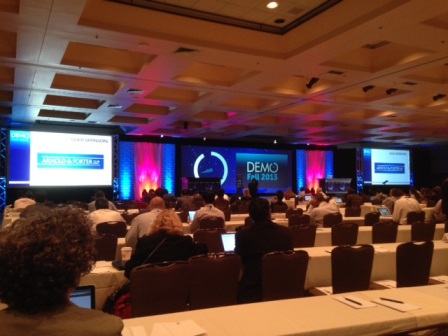 Last week, I provided a brief round-up of my experience at the DEMO Fall show in Silicon Valley, and highlighted three of the companies that stood out most to me after the first day. Even though some in the technology media in particular pan the show, the long-running event has never been more relevant for those of us who love the truly audacious earliest-stage entrepreneurs—those who take what may seem at first like a crazy idea and run with it, and those who are trying to solve big, complicated problems. It’s a refreshing contrast to the hyper-cynicism often found in technology startup media.

The show is certainly not a cake walk for the participants. First of all, show producers Eric Schonfeld and Neal Silverman and their team have in-place a careful and rigorous system for vetting applicants. Once the founding teams make it there, they are faced with tough questions from a panel of experts in their field—often VCs who may or may not consider investing in their ideas. Finally, show attendees vote to choose the DEMO Gods—essentially the crowd favorites across all categories (you can see this show’s DEMO Gods and view their on-stage demos here).

Overall, I found the most interesting DEMO startups to be those that are either solving very practical problems that seem to be just begging for a technology solution, or those that focus on creating efficiency or lowering costs in existing industries. Efficiency and cost-cutting may not be very ‘sexy,’ but when applied to industries like healthcare or to problems like email overload, the value is immediately clear.

While I wouldn’t dare go against the crowd (that would not be in-vogue in the age of crowdsourcing, now would it?) and choose my own favorites, here are some more DEMO startups that I found particularly interesting:

Skully Helmets: This was a DEMO God winner that presented in the ‘Wearable Computing’ category. It is essentially a ‘smart helmet’ for motorcyclists. It includes cameras and voice-activated technology that gives riders peripheral vision and allows them to see behind them, and includes a customized version of Android that allows them access to GPS and weather reports, among other features. The most important innovation, though, is that it can help riders prevent an accident in the first place. The only question in my mind was how steep the learning curve is for riders to adjust to cameras. While admitting that it takes some getting used to, founder and CEO Marcus Weller assured me that it’s a relatively easy adjustment.

I may be biased toward this solution because I live in Los Angeles—a particularly dangerous city for motorcyclists, and several acquaintances of mine have had accidents that a device like the Skully helmet could perhaps have helped prevent—but it’s a solution addressing a need that was bound to appear with the growth of Google Glass and other wearable technologies.

PointDrive: Email sucks, and attachments really suck. Okay, I don’t want to be too hard on email—after all, it really has changed the way many people communicate. But there has been limited innovation in email and attachments over time. PointDrive, which is targeted primarily to sales, PR, and marketing pros, turns an email with attachments into a visually pleasing (imagine that!) and easy-to-navigate presentation. It holds the potential to be a huge improvement over the current email/attachment paradigm. However, email is a potential minefield for new applications, due in large part to filters that individual users customize to organize their email. This point was raised by one of the judges during PointDrive’s on-stage DEMO, when she asked how the application would work with filters she has set up for emails containing HTML that automatically sends them to the trash. I had a conversation with founder and CEO Bill Burnett where I raised this issue, and he made it clear that the team has thought this problem through and has solutions in the pipeline. In any case, it’s a brave endeavor to take on the email/attachment monster, and PointDrive looks like a positive step forward.

Pristine: Healthcare technology is poised for a huge breakthrough over the next five years. I certainly am not going out on a limb when I say that. Between opportunities created in the U.S. by the Affordable Care Act, growth in new technologies that are a particularly good fit for healthcare, and wide-ranging recognition that the system in the U.S. in particular is broken and inefficient, a new wave of health tech companies should be on the fast track to major profits in the near term. Pristine (another DEMO God winner) is an example of the frankly breathtaking potential of new technology in the hospital and on the way doctors do their jobs (for another example of this from DEMO, see my roundup from day one of the show: startupbeat.com/2013/10/17/day-demo-ditching-pager-credit-card-password-id3509/). The company has developed a platform using Google Glass that enables doctors to collaborate on patient care in real-time. The potential benefits to this are obvious, especially considering that most healthcare professionals in hospitals still rely primarily on pagers, land-line phones, and whiteboards to collaborate, costing money, time, and no doubt resulting in less efficient and lower quality care for patients.

For any healthcare technology like this, there are hurdles—in the U.S. they include HIPPA regulation, the fact that the platform has to be purchased and implemented hospital-wide, and overcoming the potential hesitancy of healthcare professionals to adopt new technology. On top of this, these kinds of platforms will require extremely reliable broadband networks in order to work effectively. However, the potential is huge—the company’s demo really says it all.

I’ll be posting a few more times over the next couple of weeks about standout DEMO companies. In the meantime, you can watch all the DEMO Fall presentations on the DEMO YouTube channel.

Featured Startup Pitch: LogoGarden wants to ease the process of branding for the smallest of startups