It’s not every day that a developer launches an app that truly changes the way people connect with each other, especially with today’s over-reliance on nonverbal communication methods like texting and instant messaging. However, Joel Schwartz, founder of the Parlor.me voice-based social networking app, did just that. Growing up in the ’80s and ’90s, a time where phone calls and face-to-face meetings were the only ways to stay connected with others, Joel realized that today’s social media world was in need of verbal communication. He set out and finally solved this issue with Parlor.me, the first and only social networking app based on vocal conversations!

“I have always been very social and outgoing. Watching the app world explode, it seemed that voice was being left out of the social arena. Thus, I created Parlor.me as a way to have a verbal, one-on-one conversation with someone about a shared topic of interest.” – Joel Schwartz, founder of Parlor.me

Parlor.me is the first application that instantly connects real people in real-time conversations about a topic of shared interest. Parlor.me is reinventing the art of communication by providing a platform for people to step out of their comfort zone and engage in a deeper way of communicating. The name for the app is even inspired by a parlor in real life.

“In the very early planning stages of the Parlor app, I was asked by a local charity to help them organize a yearly ‘Parlor Meeting.’ Through my research for the meeting, I saw that the definition for parlor is ‘a place set aside for speaking with someone,’ which is exactly what my app is all about. The Parlor app is a space for you to verbally chat one-on-one with someone, much like one would do in an actual parlor.” – Joel Schwartz, founder of Parlor.me

The platform that Parlor.me built can currently handle 100,000 simultaneous connections and can quickly scale to many millions. Since its launch in June 2014, Parlor.me has reached 2.4 million total downloads and over 450K monthly users. It is even projected to reach 100 million users in 2017! According to Joel, much of this success is attributed to building and maintaining a positive team that stays up-to-date with the latest innovations in their industry.

“Maintaining positive, energetic, and personal relationships with all of our core team members is the most successful strategy that has helped us grow our business. Having those relationships have always made certain that everyone is putting in 110%. One way the Parlor.me team taps into creativity is by staying up-to-date with the latest in our industry. Consistently reading about the latest tools that startups use and discussing new software and technologies helps us all think up new ideas and ways to be more productive. To be truly creative and ahead of the app game, it is important to make innovations fast, fun, and workable.” – Joel Schwartz, founder of Parlor.me

Parlor.me is proud to be the only social talking network app out there. As a father of 5 young kids, Joel knew that today’s digital communication would have an impact on young people’s ability to tap into their interpersonal skills later in life. If kids are unable to acquire those skills before adulthood, successfully navigating the real world could be scary and the next generation could be filled with a genuine fear of communicating face-to-face with others. He and his app are helping to solve this issue by enabling people to courageously invest in relationships and take conversations to a deeper level. As the creator of a truly unique social networking app, Joel’s entrepreneurial success story is an inspiration to all.

“I love running my own business because I love building things. To me, there is no greater feeling than starting with the most unassuming people and materials and finishing with the most amazing teams and products. Building teams, products, and companies is an ever-challenging, yet exciting task that I enjoy every day.” – Joel Schwartz, founder of Parlor.me 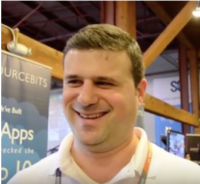