3D Printing allows us to radically disrupt the way we design, manufacture and distribute products. We’re making secure distributed manufacturing via Secured3D possible, and bringing the 3D Printing process as close to one click away with 3DPrinterOS. We’re lowering the barriers of entry to 3D Printing, and protecting the valuable work of those already in the field. We hope to make 3D Printing as secure and as simple as possible for everyone in the world.

3DPrinterOS is the world’s first cloud-based operating system for all 3D Printers. Through a single interface, the ability to design, manufacture, and distribute objects is just one click away.

Breaking and designing things has been part of my DNA from a young age—especially since my parents were both Ph.D. engineers and would let me hide under their desks while they gave lectures.

When I started working for my first startup, Austin Digital, it was amazing to have the opportunity to work on both hardware and software at the same time. Also, being at Dell and working with Zero-time manufacturing completely opened my eyes and mind to what was possible with computers and automated factory assembly.

The inability to take an idea from the virtual computer environment, and make it exist in the physical world, has been a mitigating factor in building rapid prototypes for companies since the beginning of manufacturing.

While 3D printing has been around for 30 years, it was only accessible to very few large companies and key individuals. Unless you were lucky enough to work with a big company, or given unlimited flexibility to build anything that came to mind, you were limited and restricted to what you could construct out of the materials at hand.

With the success of the RepRap open source 3D printer project, and low-cost printers making their way into schools, we are seeing something revolutionary happening in regards to the rate at which innovative ideas can materialize into real physical objects. The 3D printer will be as valuable, if not more than, the pen, paper, or computer.

According to independent research company Canalys: “In the next five years the 3D printing market will grow by over 500 percent with a year-over-year growth rate of 45.7 percent. The size of the global market, including 3D printer sales, materials, and associated services, is predicted to reach $16.2 billion by 2018.”

Considering the current explosion of desktop 3D printers, there is clearly a very large void in the market for an operating system that can run all these 3D printers.

3DprinterOS is the only operating system that works with 90 percent of FDM printers, is neutral to the majority of CAD design software, and is scalable for new 3D printers entering the market. We will be expanding our support to include high-end SLS and SLA printers as well. By building a platform compatible with the majority of design tools and 3D printers, users can collaborate, communicate, and distribute physical designs in a consistent and secure manner for the first time.

Additionally, with Secured3D, we’re able to provide Fortune 500 companies with security not only in printing, but encrypting the entire design-to-manufacturing process. Very similar to the explosion in network security we saw in the late 90s, with Juniper routers selling for $200K + annual service contracts, we’re going to see 3D encryption solutions selling for $500K-to-$1M annually per Fortune 500 company.

Enterprises are now beginning to understand the risks associated with file-based systems, and the fact that their IP can easily be stolen. Even Shapeways has started to feel the strain of protecting their 3D IP. The victim of one of the most high profile cases of 3D IP theft so far in the world (3DPrintlr) has turned to us for security, as only our solution is built to protect the unique IP associated with the 3D Printing world.

Currently, many competitors can do one thing well—i.e. build a printer, slice 3D models, repair 3D models, search for designs, or have a web-based database of 3D printer owners. However, this makes for a completely fragmented market that’s confusing to navigate for enterprises and consumers alike.

3DprinterOS unites the entire 3D ecosystem with an operating system in the cloud, which can support the majority of FDM printers and applications, instead of just a single printer. 3DprinterOS combines the ability to control with cutting-edge security via our Secured3D solution. This allows for full real-time command-and-control over clusters of 3D printers, and provides true distributed manufacturing to the masses.

We’re looking for printer manufacturers and 3D App developers to include in our initial launch of 3DPrinterOS. We will be looking to expand our team in the upcoming months, in both the U.S. and Europe. We are also actively looking at several venture capital firms in the United States and Europe for Series A funding. 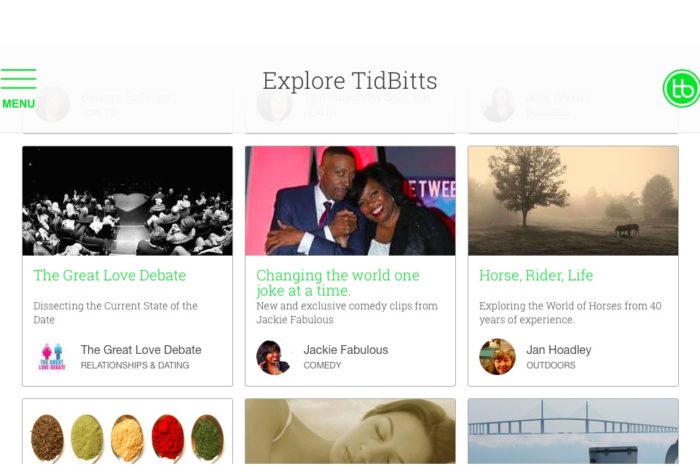 TidBitts has built a platform that gives exclusive ‘bite-sized’ content to consumers, and a new revenue stream to publishers