In light of recent news that data being collected on sites like Facebook is actually being used against its users, there is one new startup looking to protect your privacy and avoid your data from being constantly monetized.

Asora, the potential disruptor to an industry that relies on providing free sites, launched on May 21 and founder Aziz Ergashev has made it the startup’s mission to use blockchain to let web users protect their Internet data from sites and corporations. He said he was inspired by the recent Congressional hearing with Mark Zuckerberg and Facebook to combat the “helpless feeling” he had of big companies tracking your data to make an ad-blocker that won’t let them. 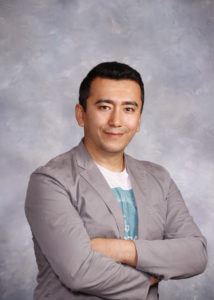 “If you go to Amazon.com and search for something else, then go to a new site, that same thing will follow,” Ergashev said in a Wednesday web chat. “That’s a privacy breach because I didn’t ask Amazon to follow me to CNN.com.”

Ergashev said that the average web user has to block 2,000 ads per day. But more than just the nuisance of having pop-up and banner ads appear on your screen, Asora is focused on fighting back against what it calls the “surveillance economy,” which monetize’s users personal data en masse.

Ergashev and the company are trying to get between you and those companies to offer up some needed protection and, eventually, make advertisers and companies catering to them like Facebook offer you direct incentives for sharing your personal data.

“Everyone is under surveillance 24/7 and you cannot even know how much companies like Facebook or even hidden companies like Axiom and Equifax have on you,” Ergashev told reporters Wednesday. “We want to make those databases stale by blocking every single beacon.”

The Asora CEO pointed out that the digital advertising is worth hundreds of billions of dollars and no average Joe user is seeing a penny out of this massive wealth that his own data goes in to creating.

“Our (userbase) is every single person who knows how to use the Internet,” Ergashev of his potential for a large clientele base. “Every platform that is giving you a free software is saying take this software and we’ll use your data in return. The value you are generating for Facebook is much higher than the value you are getting out of it.”

Ergashev said that ad blocker users are growing by 50 percent each year and expects that, partly through Asora’s “renaissance of ad-blocking” that soon the vast majority of users on the Internet will use similar blockers. It is estimated that 20 percent of Internet users aged 16 to 34 are already using ad blockers on their computers and personal devices.

By just installing Asora as an extension on your preferred browser, Asora does the rest of the work by blocking ads and also data trackers trying to survey you while on the Internet. It then tallies up these ads to show the impact you are making against the advertising industry, which, Ergeshev figures, will have to eventually change its predatory model if it wants access to users protecting themselves.

“Digital advertising industry will have to come to us for your data,” he said. “They won’t have any other way to reach you. The industry is like hunting and users are like prey for them. We want to block any possible intrusion.”

Ergashev said that Internet users should start taking their data into their own hands by forcing those conglomerates profiting off of digital advertising to ultimately pay you directly if they want access to your data.

“You don’t even know how much data is being circled around you,” he said. “So stop that data and make it stale. Get every single dollar spent by brands into your pocket. You are a participant of a $250 billion industry and you get nothing out of it. Google, Facebook, and Amazon get all that money.”

What Asora wants to stress to Internet users everywhere is that they don’t have to blindly go along with a rigged system that these corporate giants have set before them. By taking back your personal information and protecting it, you can again feel free on the Internet.

“Be the master of your own data,” Ergashev said.