Bombd now available in the U.S.: $1.5M Seed in two days after launch of MVP

(Venice, California) – An explosion of change is occurring within the messaging world right now, and rather fittingly, the company lighting the fuse is named Bombd. The Bombd team is stoked to announce the official U.S. launch of their app, a first of its kind, request messaging app unlike the rest which is now available for download on iPhone & Android nationwide. Bombd takes cues from the growing user trend away from “broadcast-based” social media and messaging, with the result being a creative new messaging platform that zigs while most are still zagging. The technological underpinnings of the Bombd app eliminate the scripted, photoshopped and otherwise highly-edited B.S. content frequently found on social media in order to only provide users with “real time” content that they have explicitly requested.

“Many people aren’t consciously aware of this quite yet, but when you look at trending behavior on social media and the growing migration towards more intimate platforms and ‘real’ online experiences, it screams out for something like Bombd.” says one of Bombd’s co-founders, adding “People are getting sick of all the super-edited, scripted, disingenuous content clogging their feeds. Bombd quite literally gives you exactly the content you want to see, and social media as a whole is more than ready to move in this direction. At Bombd, we don’t give a shit about how you look, we care about what you’re doing, Right Now.”

Bombd thrives on unedited, unfiltered, real-time photographic content which is generated in a purely reactionary manner, being created then shared with specific users only after it has been requested by them. This is a refreshing new direction for social messaging, especially when compared to the relatively indiscriminate “broad stroke” approach to sharing content, an approach that has for too long been the standard within the social media messaging realm.

The Bombd app is nicely intuitive, its aesthetics are clean, and its process is straightforward. Download, add friends, send Bombs. Once sent, the recipient receives a notification that they’ve been Bombd and is given a three hour activation deadline. Upon activation, the recipient’s smartphone camera automatically turns on and a seven second countdown begins. When the seven seconds are up, the camera captures an image and blasts it back to the original “Bomber.” It’s as simple as that. No filters and no edits, just genuine “Right Now” content unfettered by the scripted, photoshopped rigmarole that has come to dominate traditional social media. Additionally, users can group people into various “Bombd Squads” which allows Bombs to be sent to multiple individuals simultaneously, and the app also has a well-equipped chat function for continuing the conversation post-Bomb.

There is an ever-growing body of evidence which suggests people are increasingly shunning ”traditional” broadcast-based social media platforms in favor of more private and intimate direct messaging apps like Kik, WhatsApp, and Facebook Messenger. With Bombd you get the selective privacy and real-time nature of those services, but with off-the-cuff photo content that’s just as candid as the messages being sent. Instead of asking your friends what they’re doing, just send them a Bomb and let them show you. Additionally, photo sharing platforms such as Instagram have become hubs for highly-edited and slickly branded content, which has overwhelmingly conditioned people to expect that any photos they see or share online must be edited or staged in some way. This mental conditioning is quickly eroding any remaining semblance of the genuine and “real” nature of social media, but don’t fear! With Bombd there are no filters, no edits, and no bullshit. Just Right Now, Real as F*@% social media. As the co-founder previously said, “We don’t give a shit about how you look, we care about what you’re doing, Right Now” which is exactly what social media needs more of. 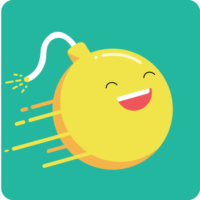 Bombd now available in the U.S.: $1.5M Seed in two days after launch of MVP