Cryptocurrencies promise a lot; and, actually, they could deliver

Many expect Bitcoin to be the game changer that will show its worth soon. Also, there are more than 600 alternative currencies around that are competing with the leading coin! Something is going to happen that will reshape the financial world and, as we all depend on money, it is going to change our lives dramatically.

Cryptocurrencies promise a lot. And, actually, they could deliver. This article is about why they haven’t yet and what should be done to facilitate the adoption and usage of this ingenious device to achieve the breakthrough.

First of all, we need to remember that FinTech — as the name suggests — consists of two parts — Finance and Technology.

One of the biggest issues in the cryptocurrency ecosystem today is that it is too obsessed with ‘Tech’ at the expense of ‘Fin.’ Blockchain is great technology and no one should underestimate it. However, it is not technology that makes Bitcoin and other cryptocurrencies unique from a financial standpoint.

Blockchain can indeed be used by mainstream banks to issue and manage fiat currencies. We have paper notes, checks, cards, mobile banking, and we could have blockchain — just another ‘Tech’ way to run the same old ‘Fin’ system.

The revolutionary nature of bitcoin is that it is recognised as a viable international currency though it is not backed by a national state or a supranational institution. It is firstly about the community of adopters, not about technology per se. We live in an age when a currency of people can be designed and issued by people and serve people. This excites many from an ideological point of view, however surprisingly this facet of the Bitcoin ecosystem is widely ignored when it comes to FinTech startups and new services.

There is almost no discussion about what should be done to extend the reach, increase adoption, and make the coins widely used by all people and businesses for the common good. Indeed, the problem is that many people ‘outside of the bubble’ do not have a chance to test the new concept in a friendly environment where their normal, casual questions about how to get the coins and where to spend them are directly answered. Cryptocurrencies will be perceived as a toy for geeks unless the questions about protocols, blocktime and dependencies are replaced with questions about earnings, sales and spending. Only a few people know how credit card transactions are processed and it is not an obstacle for their universal acceptance. Today after creating a wallet you are left puzzling with a question: ‘what’s next?’ The fundamental issue is building an ecosystem where every adopter could dive into a community and marketplace where they could start immediately using the coins.

The Bank of England recently issued two reports covering the tech and fin facets of digital currencies separately. These reports are worth a read and the quotes below are very enlightening:

“Although Bitcoin introduced a new currency and a new payment technology together, the distributed ledger technology could, in theory, be used without the creation of a new currency. As emphasised by Haldane and Qvigstad (2014), it would technically be possible for an existing central bank to issue digital-only liabilities in a distributed-ledger payment system equivalent to those deployed by recent digital currencies.”

From the paper about finance and the economics of digital currencies:

“Digital currencies have meaning only to the extent that participants agree that they have meaning. That agreement takes the form of a public ledger and a process for how changes to it are made, including the creation of new currency.”

“At present, however, digital currencies fulfill the roles of money only to some extent and only for a small number of people. They are likely at present to regularly serve all three purposes [i.e. store of value, medium of exchange and unit of account] for perhaps only a few thousand people worldwide, and even then only in parallel with users’ traditional currencies.”

“There is little evidence of any digital currency being used as a unit of account. Although a small number of transactions between individuals will occur in which the parties negotiate and agree on a price in bitcoins, these are believed to be isolated and largely unconnected… Indeed, start-up companies seeking to offer bitcoin payment facilities typically offer retailers the opportunity to price entirely in fiat currencies, using the digital currency only temporarily as a payment system.”

In a nutshell, The Bank of England stresses that the biggest problem for widespread adoption is that people and businesses:

– do not trade using them in sufficient volumes,

– do not nominate prices of their goods and services in the digital currencies, and

– do not use proceeds to fund their costs base but rather convert them immediately into traditional currencies.

This is obvious and a solution to this is extremely important, but surprisingly this still has not been seriously addressed by the digital currency ecosystem yet.

The only meaningful solution to this problem is building a wide and inclusive ecosystem of customers and merchants, which constitutes the complete supply chain and where digital currencies can circulate effectively and efficiently.

Put simply, every individual or business adopting a coin should immediately be able to:

– find other people and businesses that adopt the coin and connect with them,

– offer goods or services for the coin, be it your gadgets, furniture, books or business products,

– look for goods or services you need and are willing to buy with the coin as well as regular suppliers of these goods/services.

We started a project some time ago to create a digital currency with a profound design which would not have the pitfalls of Bitcoin like fixed supply and a deflationary nature (which is also highlighted in the Bank of England’s report above as an important problem). This is also an interesting theme which should be carefully researched and discussed.

We decided that such a platform is a pre-requisite of any coin and as such have built it first. The platform is called moBUinet — the modern business network — and was launched recently.

As a part of our journey, we have discovered that there are other very well-designed currencies and some of them are pretty similar to what we were going to develop ourselves. So, now we’ve opened the platform up to all coins and want to focus on helping every digital currency user and merchant to achieve real benefits from adopting the new technology.

We hope the alternative financial system is truly on the edge of the breakthrough and that our 2 cents will contribute to this. 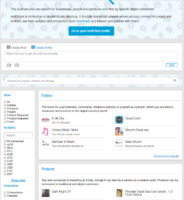 Cryptocurrencies promise a lot; and, actually, they could deliver