From Russia, with love for tech

New entrepreneurs making it big in the Silicon Valley

In the Silicon Valley, entrepreneurship and innovation are as common as breathing, and while the landscape has changed significantly since the days when the Alone Indians called it home—since the Spanish settled, and since names like Barron Forbes and Wells Fargo

enjoyed the wealth from the mercury mine and shuttled said mercury to the gold fields—people from all over the world still flock to this land for one thing: the promise of something greater.

Recently, I sat down with three amazing Russian-born entrepreneurs to talk about their experience, lessons learned and their perspectives on entrepreneurship.

Why did you choose the Silicon Valley?

There are a lot of people from around the world, not just people from California. You meet people from around the world that have this energy, that have this crazy conviction that they can become the next Google, that they can build the next Microsoft. Before I came to the Silicon Valley I was living in Boston—it’s a great city with great universities but a lot of people have a corporate mindset that they want to work a nine-to-five. When I came to the Silicon Valley, and I started interviewing people for my company they didn’t care about that. They were really convinced that they could build the next big thing. When I said, “nine to five,” to them, they said, “nine am to five am?” Having these types of employees will help you build an amazing team.

Plug and Play was the place where we started our company. I knew Saeed from Boston and when I came to the Silicon Valley, the first stop for me was Plug and Play.

Our first investor came from Expo. When we were just starting our company—March of this year—we went to EXPO and met Ryan Tu, an investor who really believed in our idea and within a day, he invested in our company.

What is your advice to other entrepreneurs?

What is Pinerly and how did it get started?

This was at a time when Pinterest was just taking off and once we realized 30 percent of our traffic was coming from Pinterest, we decided other brands would want to know which content drives the most traffic to them, so we decided to offer them a new way to measure their marketing efforts.

We put up a landing page on March 2, and within two weeks, we had 18,000 brands that had signed up—and this was before we had a product. We promoted this across a couple blogs and we put viral incentivized features into the invitations we sent out. The more friends you invited, the faster you would get early access as well as bonus product features.

Right now we have 65,000 users—20,000 brands, bloggers, agencies, you name it…anyone that markets visual content and needs to measure it, can use Pinerly.

What is your advice for new entrepreneurs?

Just start, because you’re going to fail. If you have extensive market experience, there’s a chance that they might hit on something in that market—but usually, if you’re a young entrepreneur looking to change the world, just start because you’re probably going to fail—you’re simply going to miss the market. What you’re thinking of building will take a lot longer to build than you think, it takes time to figure out how it all ties together as a business, and the reality is that for first-timers, you’re more than bound to fail. So fail and get up and do it again, and again. Eventually you’ll learn and end up hitting the right market.

Failing is not bad. I used to think failing was terrible. I used to be really hard on us when we failed on our first business, but now I’m proud of it because we genuinely failed and from it, we learned a lot. We used to waste eight months, now we just waste two days—we deliver faster because you can’t predict the future. Work as hard as you can and don’t take failure too seriously.

In Conversation with Roman Karachinsky, co-founder and CEO of News 360

News 360 is a news personalization platform that started a little more than two years ago. We try to understand what people are interested in by looking at everything you do online, what you post on Facebook, on Twitter, which articles you read, which sources you prefer and which topics you’re interested in. Once we get an idea of who you are and what you prefer, our goal is to build a very concise newsfeed for you that’s going to cover all of the interests that you have. It will give you stories about your professional interests right next to stories about your hobbies, next to stories about your hometown, next to stories about kittens and whatever you like. We look at your online history and collect thousands of status updates, likes, tweets and so on, which works out to tens of megabytes of pure text per user—which doesn’t sound like much, but it’s quite significant when you realize we have 1.5 million users. This text that we collect is run through our semantic analysis platform that spits out an interest profile that maps out what your interests are.

How did you come to the Silicon Valley? How is it different?

Two years ago I started working on News 360 in Moscow and six months later, we moved here. It wasn’t really that hard to move here from Russia and there’s not really any other place I would go in America except here. The whole point is to get close to the smart people who are building the next wave of innovation.

We have about twenty-eight people in the company, split between two offices—one here in Sunnyvale, Plug and Play, and one in Moscow. Culturally, there’s a huge difference. There is a certain expectation that you have coming here, which is very high. You think that everyone is going to be like Steve Jobs and that’s not exactly the case.

I love it here in the Silicon Valley. I think it’s the best place to be if you’re doing something in technology. It’s good in that the smart people get to ‘win’ if you will. They survive. The other people leave.

At the same time, I like having much of our team in Moscow where it’s easier to hire people and it’s less competitive. You don’t have this ridiculous pressure, you don’t have the ‘poaching.’ In the Silicon Valley, if you find someone who is really talented, they’re going to leav
e you in a year unless you’re growing by leaps and bounds—there’s not a lot of loyalty. So I like that at least our development and engineering is somewhere outside the Silicon Valley where it’s much easier to build a healthy team where everyone is friends, everyone is loyal to each other.

Do you think Silicon Valley employee pivot culture will ever ‘settle down’?

I think that the entrepreneurial culture of working for a company long term, like the old days of IBM or Xerox, might be returning. I hear that now from entrepreneurs. It’s much healthier for the long-term. I think it’s something that will outlast these boom and bust cycles. It’s healthier to build something that will last a long time—maybe even longer than the Silicon Valley will geographically live.

What is your advice for new entrepreneurs?

Really take your time when you pick the people you work with. Spend time thinking, not just about product, but spend time thinking about strategy in terms of building the team, the culture, and don’t do it as-you-go. You have to try and have a plan. It may not work 100 percent but it helps you.

Having a plan in your mind; I think that’s what being an entrepreneur is. If you’re good, you will want to put that plan down on paper—maybe not follow it to the letter but at least attempt to.

Plug and Play Tech Center is a business accelerator that specializes in growing tech startups. Headquartered in Sunnyvale, California, Plug and Play’s global network includes 300+ tech startups, 180+ investors and a community of leading universities and corporate partners. From unique industry networking events, education and immersion programs to M&A, Plug and Play has everything tech startups need to get organized, connect and grow. www.plugandplaytechcenter.com 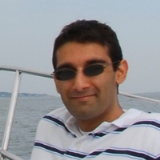 Through interviews, events and a 48-state road trip, IdeaMensch is on a mission to inspire entrepreneurs of all stripes