Just two months after a tragic accident involving an autonomous car that left a pedestrian dead in Arizona, Uber has announced it will stop its driverless car program in the southwestern state.

The company made the announcement Wednesday that laid off 200 employees, mostly test drivers. Uber has already begun plans to kick off a similar program in Pittsburgh and other companies have gotten into the market in other Midwestern states like Ohio. It also has plans to start autonomous driving tests in California, the largest state economy in the U.S.

There is still a pending federal investigation into Uber as investigators try to find if there were any preventable circumstances that caused the March accident.

“We’re committed to self-driving technology, and we look forward to returning to public roads in the near future,” Uber said in a written statement. “In the meantime, we remain focused on our top-to-bottom safety review, having brought on former NTSB Chair Christopher Hart to advise us on our overall safety culture.”

In the middle of March, a self-driving Uber automobile struck and killed a pedestrian in Arizona in the first such crash involving an autonomous car and a pedestrian.

“To be clear, we are not shutting down our self-driving program,” stressed an internal Uber email from exec Eric Meyhofer. “We are actively working to make our return to the road a reality with a goal of resuming operations in Pittsburgh this summer. We are also in conversations with the California Governor, California DMV and cities of San Francisco and Sacramento.” 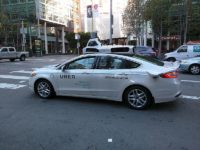