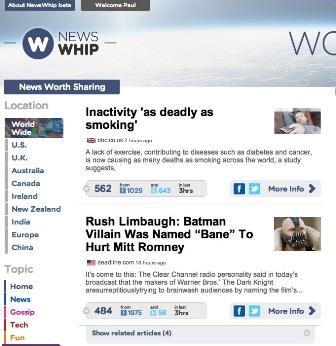 A Q&A with Newswhip co-founder and CEO Paul Quigley. The Dublin, Ireland-based company was founded in 2011 and closed a Seed funding round earlier this month from Hal Philipp, a partner with Meridian Growth Capital, and Shane Naughton, a founder and former CTO of TaxStream.

SUB: Please describe what Newswhip is, and the value proposition you bring to news discovery.

Quigley: NewsWhip is a live menu of the world’s most shared news stories. We monitor thousands of publications and keep track of how many shares and tweets each of their stories is getting. We gather the fastest spreading stories—based on tweets and shares in the last couple of hours—on NewsWhip.com. The result is a guide to what’s socially hot right now in dozens of places and topics, like the U.S., the UK, tech, gossip, or even psychology.

We also have a pro product called Spike, which is used by journalists. It’s a more granular guide to what’s trending, broken out based on publication time and source. It also includes pre-viral feeder sites, like Reddit and YouTube.

The unique value proposition is that the stories on NewsWhip have won out through actual human decisions to share or tweet stories. And humans are excellent at sniffing out good stuff, so NewsWhip is a great guide to engaging content.

Quigley: Our target user is anyone who is time poor and doesn’t want to click around a bunch of places to see what’s going on in topics they care about. If you’re into fashion and want to see what’s hot today, those will be the stories that are getting shared and tweeted, but from loads of blogs and sources. With NewsWhip, you can see it all on one page, and click into any stories that catch your eye. It also makes NewsWhip a great way for people to discover new news sources, and we get a load of positive feedback around that.

Quigley: We’re the social answer to Google News, so I suppose they’re our competition. I’d take a wider view and say we compete with every online distraction you can access right now—from Facebook to YouTube. We’re in the business of giving people quality information and entertainment—like half the Internet.

We have a much more specific market for Spike. We’re creating a new type of service there, so our competition is apathy, not another company. Thankfully, we’re getting a strong response. People want it.

SUB: What differentiates Newswhip from the competition?

Quigley: We’re socially powered, so the news we collect isn’t dull announcements or press releases, it’s the news that people are actually sharing. Crowdsourced news—especially within a topic like startups or fashion or science—is extremely high quality.

For our newsroom tool, Spike, there’s more to it. For the first time in history, large scale news distribution is happening in a public, measurable forum—online social networks. So for the first time, publishers can get a real-time, granular view of how each others’ stories are performing. Spike is the gateway to that data. It’s also a powerful discovery tool—instead of clicking around Reddit, YouTube and Twitter for new trends, newsrooms can see everything that’s taking off, and exactly how much it’s taking off, before it’s even been turned into a news story.

Quigley: NewsWhip began as an idea I had in early 2011—how can I curate the best content online? Initially, I came up with an idea of querying social networks for multiple data points to monitor the ‘delta’ or change in Facebook and Twitter scores between time periods. I took the idea to NewsWhip’s co-founder Andrew, and together we developed a plan to monitor the rate of change of social engagement—or speed—associated with each news story. We reckoned this was a winning idea and got to work on a prototype right away.

We built NewsWhip’s technology in 2011 and went live with our beta public site late that year. Then news companies became interested in more granular, and faster, access to the data we’re collecting, so we developed Spike.

SUB: What was the inspiration behind the idea for Newswhip? Was there an ‘aha’ moment, or was the idea more gradual in developing?

Quigley: A bit of an ‘aha’ moment. There was a problem: the Internet is already full of stuff, with tens of thousands of new news articles each day. So how can you curate the best stories? What does the ‘best stories’ even mean? Then an idea—why not measure what everyone else is curating? One night I did some tinkering with the Facebook API. I was almost jumping up and down when I saw how quickly it updated. Then me and Andrew developed the idea of using the rate of delta or social speed of each story. That was the big idea in the bag. Since then, we’ve been developing incrementally, but solidly.

Quigley: Deciding what to do next. Every day. We’re a startup with two products—consumer and pro, and we sometimes get the advice that we should only do one. But they both work off the same core technology and they’re complimentary. So we’re focused on building both sides of the business, though that means we’re careful in how we allocate our time.

SUB: You recently closed a Seed funding round—can you disclose the amount? How do you plan to use the funds?

Quigley: Yes, though our investors asked us not to disclose the amount. We’re using that seed funding for hiring, app development, and basically proving traction in the market.

SUB: Do you plan to raise more outside funding?

Quigley: Yes, there was a load of reporting of us raising a million. We haven’t raised that much yet, though we will want to raise cash soon, once we’ve proven that NewsWhip has legs. Ideally, we’d like to get strategic investment from people in the online news space. Get expertise with the money.

SUB: What are your goals for Newswhip over the next year or so?

Quigley: Our app is in the pipeline and should be live in two months. Very excited about that. Meanwhile, we’ll be making loads of incremental improvements to Spike based on feedback from newsrooms using it—which include BBC, MSNBC, Buzzfeed, Mashable and others. We want to keep tweaking it until it’s a completely indispensable newsroom tool.