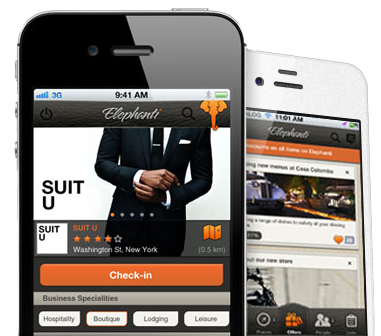 A Q&A with Elephanti founder and president Lalin Jinasena. The Singapore-based startup, which is a mobile app that connects shoppers with local businesses within proximity, announced in late December that it has cumulatively raised $4.5 million in Seed funding from LMJ Holdings and Angel investors. It was founded in 2012.

Jinasena: High street retail has seen a steady decline in sales over the years because it has not been given technology to compete with ecommerce. People today search for things to buy online, and there are many online shopping sites spending money on digital advertising to capture those shoppers and get them buying. Physical stores still rely mostly on people walking by to step in and browse inside the store to find things they would like to buy. For shoppers who want to buy specific things, they have to go from store-to-store looking for it. Elephanti was created to overcome this gap in the market. It is a mobile app and website designed to help shoppers find specific products they need in physical brick-and-mortar stores in their city. Retailers sign up for free and create a profile for their business. They can then list their products, services or menu. When shoppers search, we are able to show them specific stores which have those products. This gives the shopper the ability to browse on their smartphone and find which stores have the products, as well as which offer the best discounts or sales on that item. They can then walk in to those stores to buy the things they need.

We also ask our Elephanti merchants to give Elephanti shoppers a check-in discount. This means that shoppers are incentivized to buy from those stores, as opposed to buying online or at other stores. This also means that they get savings on the things they want, when they need them, instead of having to wait for deal sites to come up with a deal on the things they need.

Shoppers can also ‘follow’ the stores they like in order to stay updated whenever those stores have new sales, offers or products. On Elephanti they can follow any number of stores and brands, unlike on their social networks, where people hesitate because it clutters their social feeds with brand posts.

Elephanti also learns peoples’ interests, and encourages users to input their interests. The app is then able to show them interesting products and offers from stores around them. This is particularly useful when they travel to other cities or countries, where they don’t know what’s where.

Jinasena: We have designed Elephanti to be an overall shopping assistant app, so rather than focusing just on fashion or dining, you can find anything you need in one place. Therefore, our target market is for all types of retailer stores, restaurants, cafes, brands, even hotels, malls, and department stores.

Elephanti is also designed to provide personalized recommendations to its app users, and therefore it can be used by anyone with any kind of interest. Could be someone is interested in crafts—Elephanti will help them find craft stores and products; likewise for someone looking to buy a car; or for a fashion shopper specifically interested in vintage clothing, for example; and even for housewives shopping for the basics.

SUB: Who do you consider to be your competition, and what differentiates Elephanti from the competition?

Jinasena: There are many apps and sites out there who show you what places are around, and these are our main competition. But with Elephanti, we take you in-store, showing you the products they have and being able to search and find specific items. This is what makes Elephanti totally unique, because no one else provides this feature.

SUB: You just announced that you’ve raised $4.5 million in Seed funding. Was this outside funding—institutional or Angel?

Jinasena: This was raised through Angel funding.

Jinasena: This funding was raised gradually over a period of time and helped Elephanti to get developed and grow into what it is.

Jinasena: We have been using the funds to actively sign up merchants and build up our database in many cities across the U.S. and in other parts of the world. We are also using it to promote, advertise and spread the word about Elephanti. Our main objective also has been engagement between our app users and merchants, and we are happy to see this happening successfully.

SUB: What was the inspiration behind the idea for Elephanti? Was there an ‘aha’ moment, or was the idea more gradual in developing?

Jinasena: Yes there was. My background is in owning and operating retail stores, hotels, restaurants, and cafes, and I came to realize how hard it is for businesses to get real engagement, primarily because existing social media was designed for a different purpose. There isn’t a dedicated social network for retail and lifestyle, and this is why I set out to create Elephanti. The ‘aha’ moment came when I was sitting with my directors discussing how it would be so cool if the managers in our hotels had information about the guests around them so that they could greet them by name and inquire how that spa treatment was, simply by looking at their smartphone and seeing details for guests within the hotel. This progressed into not just applying to hotels but to any kind of business. This feature is available on Elephanti for all merchants. When a Elephanti shopper ‘checks-in’ to that physical store, the shopkeeper gets instantly alerted and gets a history of that shopper’s interactions with that store, as well as information on brands that shopper likes which that store carries. This helps them give excellent customer service to any customer.

Jinasena: I started developing the idea and had a team of in-house developers creating the app and website based on this idea. Over time the ideas grew into a much more complex product, creating a network that is fully comprehensive for both retailers and shoppers. I also got my lawyers to patent my innovations and set up the company framework.

Jinasena: There are a few reasons for the name. One is because I am an avid wildlife photographer and have spent a lot of time amongst wild elephants in Sri Lanka. Elephants are notorious for having a great memory, and Elephanti does too. It remembers things you add to your shopping lists and alerts you when you walk into a store that has them; it also remembers your interests and shows you interesting things around. There was a research study done which said that elephants are social animals and that herds communicate with other herds, telling them where there is good grazing and water. This behavior is so much like us humans. We always recommend to people we meet where to get stuff and where there are good deals. Likewise, Elephanti enables people to actively share through photos by tagging the store profile where they bought that hot pair of shoes, so others can connect with that store and get nice stuff, too.

Jinasena: Yes, we are actively seeking new funding to propel us from where we are to becoming the next big Internet company, and the icon that stores and brands use when asking people to socially engage with them.

Jinasena: Since what Elephanti does is somewhat new—searching for goods in the real world—it’s been a challenge to convince retail stores that they have to make themselves visible and available online. Not just online, but available on people’s smartphones. At one time, stores had to be listed on the telephone directory, and yellow pages paved the way for this. Next it was having a website, but today a website for a retail store is obsolete with all the money and effort spent by large brands and dot coms to propel their search engine rankings. Today, it’s apps, but creating an app for every store is not viable or financially feasible. Elephanti is the answer.

Now, with Elephanti gaining publicity and momentum, we are seeing an upturn in retailers signing up themselves, and this is very promising.

Jinasena: Being on Elephanti is completely free for merchants and app users. Our revenue will come from advertising, where we have developed an innovative way for brick-and-mortar retailers to advertise and get a real return on advertising expense. This aspect is to be launched shortly, and we are keeping it under wraps until then.

SUB: What are your goals for Elephanti over the next year or so?

Jinasena: We are steadily growing our merchant and user base. Our focus has been on San Francisco, where we have been gaining a lot of traction and engagement. Our aim over the next few months is to concentrate on other major cities in the U.S. to build up merchants and users and grow virally. We see people sharing Elephanti with their friends, especially when they find great deals, and also through photos.

CES envy? The best places to catch up online