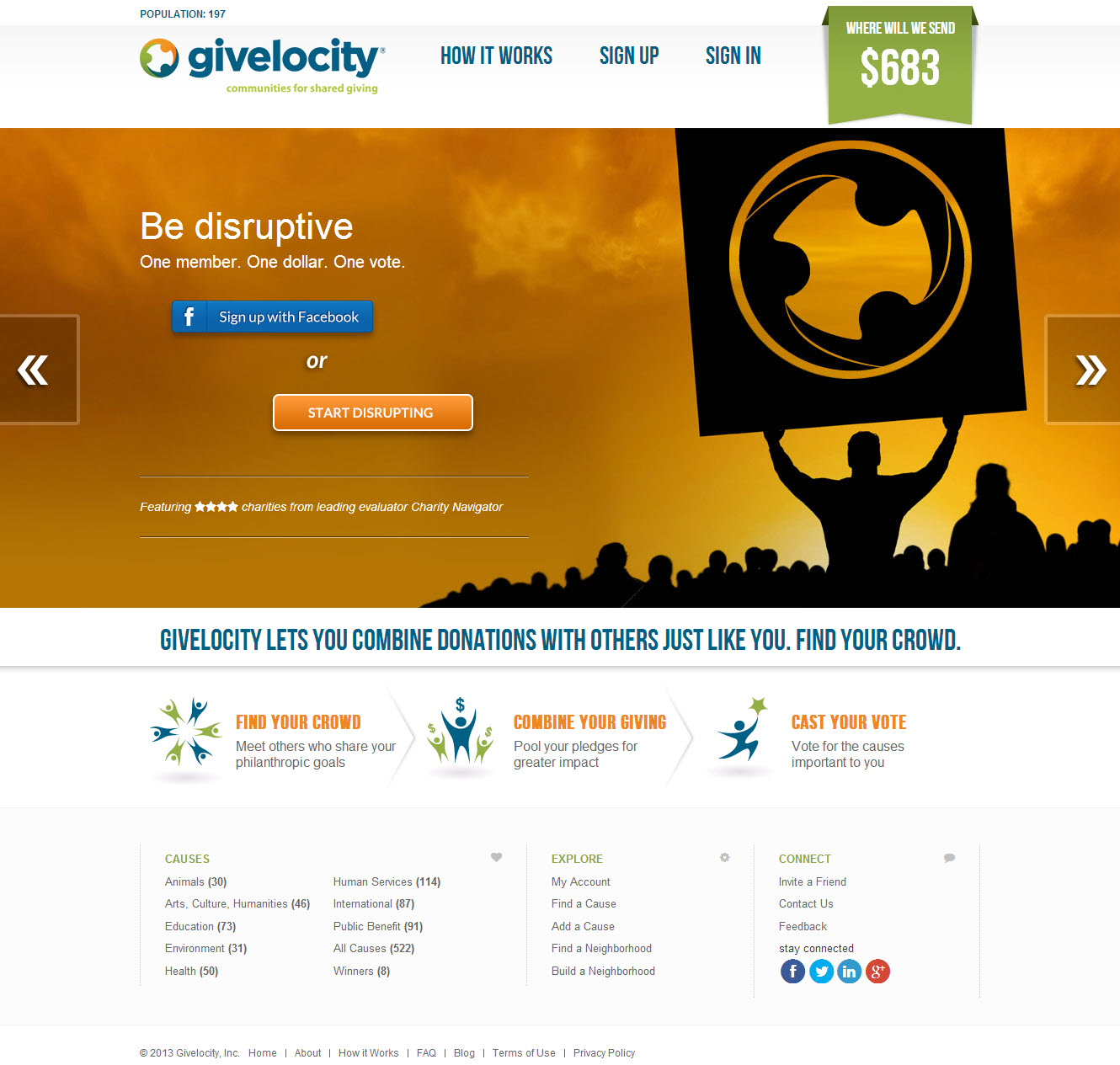 A Q&A with Givelocity co-founder and CEO Susan Cooney. The San Francisco-based startup, which is a platform that enables collective charitable giving based around themes, launched at the start of December, on ‘Giving Tuesday.’ It was founded in 2011 by Cooney and Jenn Theaker, and raised $125,000 in Seed funding over the summer.

Cooney: Givelocity is a platform for sustainable, shared giving. The site allows people to create or move in to communities, or ‘Neighborhoods,’ based on common philanthropic goals, pool donations, and vote on which causes receive their collective support every month. We’ve built a revolutionary model that nourishes philanthropic themes among people, in turn creating a more powerful ecosystem for giving.

Cooney: Anyone can join the community, pledge a monthly amount starting at as little as $1 and vote on causes that matter to them. Our target user is the person who may not have much time or money, but wants to effect change in the world. By pooling donations, we provide greater leverage and impact to everyone from millennials to baby boomers. Businesses, professional athletes, and celebrities can also take advantage of the Givelocity platform to engage their employees, fans, and followers to rally together behind shared causes.

SUB: Who do you consider to be your competition, and what differentiates Givelocity from the competition?

Cooney: I think the biggest competition is the state of the charitable market. Many people don’t give because they don’t have time, or have read stories of fraud and don’t want to risk contributing to a scandal; or, they don’t think $1 can make a difference. With over a million registered charities in the U.S. alone, there’s so much noise people simply don’t know where to start. Look at the crowdfunding space—people compare us to companies like Kickstarter and Indiegogo who promote hundreds of thousands of causes that aren’t necessarily charitable, and definitely not sustainable. Givelocity solves all of this by setting a $1 entry point, offering highly-rated charities from leading evaluator Charity Navigator, and delivering the benefits of crowdsourced due diligence, vetting, and leverage among vibrant communities of subscribed givers.

SUB: You just launched to the public on ‘Giving Tuesday’ (December 3rd). Why was this the right time to launch?

Cooney: 2013 was the second year for the Giving Tuesday movement, and it gained a lot more attention and support this year. There is a latent philanthropic revolution that’s been building and shifting for decades, now thrown into overdrive by technological innovations and our ever-increasing connectedness. We see it in the growing ambivalence of would-be donors, and arising out of the daily struggle for NPOs to build sustainable, value-driven organizations. People are more interested than ever in alternative models for philanthropy. What better time to announce the launch of a revolutionary giving platform than in a season focused on giving?

Cooney: We secured a Seed round this summer, and have recently opened our first Angel round.

SUB: What was the inspiration behind the idea for Givelocity? Was there an ‘aha’ moment, or was the idea more gradual in developing?

Cooney: I’ve been lucky to have worked in phenomenally successful startups, and have always wanted to find a way to give back. The idea for Givelocity has been forming for several years—to take my experience and skills in technology and use them to make a difference. I started by tapping into my trusted friends and colleagues, describing my vision, and getting unvarnished feedback on whether it made sense, what appealed to people, etc. They loved it, and several are active voting members today.

Cooney: I did a lot of research in the non-profit market and on the players in the NPO and NGO arena; and I consulted with financial and legal experts about the optimal business structure and model for what we were wanting to do. I strongly considered making Givelocity a non-profit, but found it to be too restrictive to be truly disruptive. We decided to incorporate the business as a for-profit social enterprise. I reached out to my network to tap talented friends and colleagues to design and develop the prototype with me, and we continue to test and learn today. I also dove into the philanthropic community, attended conferences and introduced myself to people on LinkedIn. I’ve met a lot of great people who continue to encourage me and believe we’re well on course for solving some of the major challenges facing the charitable giving market.

Cooney: It was truly a ‘light bulb’ moment. My co-founders and I brainstormed for months, and we covered lots of angles and modifications to existing words, but nothing clicked. Finally, we came up with ‘Givelocity,’ and feel it’s a nice blend of ‘giving’ and ‘fast.’ The word ‘velocity’ is defined as ‘the speed of something in a given direction,’ or ‘the rate at which money changes hands in an economy.’ We thought that was cool.

Cooney: It’s been quite a journey. Because we’re such a revolutionary model, there was little to validate us as we got started, and we had to ask tough questions about whether Givelocity was a viable venture. We’re asking people to donate as a collective, which isn’t something we’re pre-conditioned to do. Add to that, there isn’t an existing corporate structure that cleanly supports what we’re doing. We’re somewhere between a for-profit commercial enterprise and a non-profit. Perhaps even harder for me personally was taking on the CEO role after having played supporting roles all these years—it’s a big shift. Like any founder, it’s hard not to give in to fear and second-guess my decisions, but to do so in a staid market where your customers have little frame of reference, is even tougher. Yet, it’s been so rewarding to be gaining traction and to be making an impact already. It’s totally worth it.

Cooney: We charge a small platform fee, although ultimately we aim to eliminate that entirely. We also have advertising and sponsorship revenue, and plan to offer retail solutions, as well as data and enterprise licensing. As a social enterprise with a philanthropic mission, we can be more creative about securing growth capital and employing commercial strategies for scale and value creation.

SUB: What are your goals for Givelocity over the next year or so?

Cooney: Our primary goals are to continue to grow the Givelocity community, and to increase Givelocity’s visibility. We are actively enhancing features, ensuring the platform is stable and scalable, and that our Neighborhoods are strong, welcoming, and sustainable.