Stealthy startup Highfive has big-name backers and big ambitions: to change how people communicate at work

A Q&A with Highfive co-founder and CEO Shan Sinha. The Palo Alto-based startup, which is launching its private beta this week, closed its Series A funding round in late October. Investors include Andreessen Horowitz, General Catalyst Partners, Baseline Ventures and SV Angel. It was founded in 2012.

Sinha: Communication at work is broken. We are building a product that will change the way we communicate at work. The problem we are solving affects every single knowledge worker. We are focusing exclusively on enterprise use cases, but are designing the product to be as delightful and easy-to-use as the tools we use in our personal lives.

Sinha: Staying connected with people at work is something that impacts every single knowledge worker—that’s over 200 million people. We want to remove the friction of communication so real work can get done.

SUB: Who do you consider to be your competition, and what differentiates Highfive from the competition?

Sinha: The companies we typically rely on to solve these problems, like Microsoft, Google, and Cisco, have fallen short. The industry needs a new approach. We believe the solution needs to be reimagined from the ground up. New companies are the only ones that have this kind of blank canvas. We have the opportunity to give people a fundamentally new way to connect with people at work. As we launch our product mid-next year we think it will be clear how our solution is different from anything else out there.

SUB: You just announced that you’ve raised $9.4 million in new Series A funding. Why was this a particularly good time to raise funding?

Sinha: We’ve actually raised $13.5 million to date in a Series A. We knew in order to be successful we needed to get some of the industry’s best minds all together. We have support from investors including General Catalyst, Andreessen Horowitz, and Google Ventures, as well as several entrepreneurs that have been leading the way for enterprise cloud computing, such as Marc Benioff from Salesforce.com, Aaron Levie from Box, and Drew Houston from Dropbox. They all see something unique in what we’re building.

Sinha: Over the last year-and-a-half we have quietly assembled a team of experts in enterprise communications. We currently have 25 people that have built incredible products such as the iPhone, Firefox and Google Apps. They come from companies such as Apple, Amazon, Mozilla, Google, Jawbone and Salesforce.com. We’re looking to double in size over the next six months.

Sinha: We founded the company a year-and-a-half ago as Parlay Labs. We recently rebranded the company to Highfive and closed [the] $13.5M in Series A financing. We are based in Facebook’s original office in Palo Alto and expect to double from 25 to 50 employees in the next six months.

Sinha: We love the name, Highfive. It perfectly represents the kind of company and product we are creating. It will make complete sense when we share the details about our product.

Sinha: Right now our focus is on growing the team and building a great product.

Sinha: The problem we are solving is really hard. Microsoft, Google and Cisco have all fallen short. We consistently hear it’s a top-three concern for IT departments, so it’s a problem worth solving. So far, the response from our handful of marquee customers has been really encouraging, so we think we’re on to something big.

Sinha: Step one is launch private beta, and then formally launch the product in mid-2014. We’ll be able to share more about our business model at that time.

SUB: What are your goals for Highfive over the next year or so?

Sinha: Ultimately, we aim to change the way people communicate at work. For the near term, we are launching our private beta. We plan to formally launch the product in mid-2014. 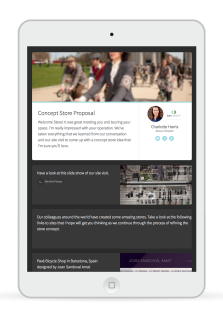