A Q&A with iLyngo co-founder Sanjay Patel. The Chicago-based startup launched its app—Cyfr—out of beta in mid-February. It was founded in 2011 by Patel and Richard Kewitz.

Patel: Cyfr is a unique instant messaging app that has a built-in retail platform on the back end. From a user perspective, the app redefines digital communication by offering users an all-in-one messaging experience, incorporating in some familiar elements of what makes apps like Snapchat and WhatsApp popular, while also adding unique, new features that are not available in any other messaging app.

Our primary innovation is the retail rewards platform that is built-in on the back end of the app. In addition to functionality that creates more purposeful communication, Cyfr also delivers tangible, real-time, personalized rewards to users. Thanks to partnerships with retailers across a spectrum of industries, Cyfr users will be able to enjoy personalized offers, coupons, and deals. We are also looking to expand our retail offerings very soon with more potential retail partners.

Patel: We are working to attract a few different markets. First, we have retailers that we are seeking partnerships with to join us on the back end of our application as a retail partner, and we are also obviously attempting to target IM users to adopt Cyfr as their primary instant messaging app.

As far as our target user demographic goes, Millennials from ages 15-to-27 are the market we have set our sights on at launch. The reason is that they have grown up with technology always being omnipresent, they love anything fun and innovative like Cyfr, and they are also used to using their mobile phone to shop. Once this target launch demographic embraces Cyfr, we feel like the buzz and excitement they will create about the app will eventually help us spread the message to attract the older demographics that also love to get great deals and shop online.

SUB: Who do you consider to be your competition, and what differentiates Cyfr from the competition?

Patel: While there are several instant messaging apps on the market, such as WhatsApp, Kik, and Viber, and also apps like Snapchat that have a similar fun factor [as] Cyfr self-destruct messages, none of them really incorporate so many features into their app like Cyfr does. So from a user perspective, that is the difference between a Cyfr and say a WhatsApp messenger.

Also, from a business perspective, we are the first IM app to incorporate a rewards system that allows users to accrue points to redeem real-time, personalized deals and offers based on what they talk about. So, I would say the convergence of communication and m-commerce is our main differentiator.

SUB: You just had your official launch. Was this a launch out of beta?

Patel: Yes. We created a beta version on Android, and we were busy working on finishing up the iOS version before we wanted to officially launch the Cyfr brand of messaging apps to the general public and reach out to the media to introduce the app. We just recently had the official commercial launch of both Android and iOS apps in February on Google Play and the App Store.

SUB: Why was this the right time to launch?

Patel: From an IM market perspective, the instant messaging market sector is in the very infancy of what is predicted to be a huge market in the next five-to-ten years. In fact, there were over 700 million IM users worldwide in 2013, and that number is forecasted to grow to over two billion by the end of 2014. We feel like we’re in the right place at the right time in the mobile messaging space. Also, with all of the buzz surrounding apps like Snapchat and WhatsApp recently, we felt like the time was perfect to launch our app to piggyback off of the recent excitement surrounding the messaging space.

Additionally, we feel like the convergence of instant messaging with the m-commerce space is where the market sector is heading. We are pushing the boundaries of technology with this app, and we wanted to be the first to provide this exciting new service to consumers to differentiate ourselves from other messaging apps out there.

Patel: We had an initial round of funding from an Angel investor, and we are currently seeking additional funding for marketing and diversification of retailers around the globe.

SUB: What was the inspiration behind the idea for Cyfr? Was there an ‘aha’ moment, or was the idea more gradual in developing?

Patel: My lifelong personal ambition has always been to break down barriers to enable everyone to be able to communicate with each other openly and easily, regardless of language, location, or the device they are using. From the time I started my last business, Key Point Technologies, my goal I have strived for is to create software that makes mobile communication as easy and effective for users as possible. The inspiration for my first company came when my brother lost an arm in a motorcycle accident. It became very difficult for him to use a keyboard, so I started looking for ways to improve the input experience for him on the cell phone. When I investigated possible solutions, I found that no one had looked into using linguistics and software to cut down the keystrokes required. That company was born out of this discovery and a desire to help people, and that quest has continued on with Cyfr.

The inspiration for creating Cyfr still lies within the same goal of helping people communicate effectively with ease. One day I received a message from my young niece that I couldn’t understand due to all of the slang acronyms it included. I thought to myself: “Someone needs to come up with an app that helps people communicate more effectively with all of this lingo.” That was the ‘aha’ moment when the idea for Cyfr was directly born. On the retail side, my co-founder Rich Kewitz has been in the hospitality and entertainment business for a long time. He has seen trends in bars and restaurants evolve, and he was looking for a way to offer highly personalized, local deals and offers that actually matter. When we talked about our ideas, we thought it made sense to combine the two elements into a single app. It’s just the way everything is going these days, combining market sectors for maximum user benefit.

Patel: First my co-founder Rich Kewitz and I pooled our ideas together. Then we did some market research into the IM and m-commerce space to find out if anyone has ever offered the sort of solution Cyfr does. Once we found out that no one had, we scoped out our platform, front-to-back. Then we built a prototype SMS system to show proof-of-concept while researching and filing patent applications. Once we proved feasibility, not only as a meaningful platform but also as a business, that enabled us to move forward and establish ourselves as a company—iLyngo, LLC—to seek out funding.

Patel: The name ‘Cyfr’ is a play on the word ‘cipher,’ which is defined as a message with hidden meaning or a message written in secret code. Since one of the unique features Cyfr contains is the ability to create, translate, and share lingo and slang, we thought it would be fun to use Cyfr as a sort of lingo term for the actual word ‘cipher.’ When we came up with the name, we tried to come up with something that sounded modern, but also had a meaning behind it. We think it gels nicely with the whole lingo concept behind the app, which is one of the main differentiating features Cyfr offers.

Patel: Maintaining vision and direction within a fast and constantly changing market has been a challenge. But we’ve been steadfast in our ideals and ambitions, and we feel they have been validated by recent market M&A activities. Acquiring further investment to pursue our main goals and growth objectives to fully enable us to launch our Cyfr platform, grow the business, and begin to make a lasting impression in the IM and m-commerce sectors has also been challenging at times. But with the right investment and support structure, we feel that we are more than prepared to deliver on all fronts.

Patel: We plan to generate revenue by taking a percentage of the sale from retailers on the back end of our application.

SUB: What are your goals for Cyfr over the next year or so?

Patel: Our initial goal for this year is to work on building a strong user base, while also acquiring new partnerships with big brand retailers. We feel like the feature set we have is far ahead of any other competition in the IM space, and so we are going to first concentrate on building awareness about what Cyfr offers to users. Once we have a user base built up, we can then begin to market directly to our user base so that we are certain that they are engaging with the app and redeeming their rewards. The more rewards redeemed with retailers on the back end, the greater our revenue projections for Cyfr become. 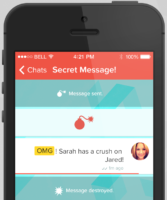