A Q&A with Panono co-founder Jonas Pfeil. The Berlin-based startup, which has created a throwable panoramic ball-shaped camera, raised more than$1.2 million through its just-completed Indiegogo crowdfunding campaign. It was founded in 2011 by Pfeil, Qian Qin and Björn Bollensdorff.

Pfeil: Panono is a throwable panoramic ball camera which captures everything in every direction for amazing 108 megapixel, 360 degree-by-360 degree full-spherical panoramic images.

SUB: Who do you consider to be your competition, and what differentiates Panono from the competition?

Pfeil: Other one-shot panoramic cameras, so cameras that capture every direction at once and can therefore capture moving scenes. Panono is the only such camera that has a resolution high enough to actually see details in the picture—108 megapixels.

SUB: You raised just north of $1.2 million through an Indiegogo crowdfunding campaign. Why did you choose to go the crowdfunding route rather than through outside equity investors?

Pfeil: Crowdfunding does not only offer non-diluting financing, but also enables a dialog with backers about features and performance while development is still going on. In our view this hugely benefits us and our backers as we can make sure the product does meet peoples’ needs.

Pfeil: We will use the funds for further development, purchase of tools for production and for the parts that go into the camera.

SUB: What was the inspiration behind the idea for Panono? Was there an ‘aha’ moment, or was the idea more gradual in developing?

Pfeil: I was traveling on Tonga where I took panoramic pictures with my normal camera. This works by taking overlapping pictures that get blended into a panorama, either on a smartphone or a PC. The problem is that this requires many images, takes a long time, and does not allow capturing anything that moves, like people. The scene has to stay still between two images. So while hiking on Tonga, I had the idea to throw a special camera into the air that captures the whole scene in one go.

Pfeil: Since the camera was first published in autumn, 2011, we worked on making it smaller and getting the price to the current affordable level. Before we started the Indiegogo campaign, we collected investment from multiple smaller investors that enabled us to develop the camera to a point where we were sure that we could produce it at the price we are offering it for and knew how long that would take.

Pfeil: The name Panono is derived from the ‘pano’ part of ‘panorama.’ Qian came up with the idea while we were all brainstorming for a name on Skype. We wanted a name that can be pronounced all over the world, is easy to remember and sounds playful.

Pfeil: Yes, we are currently preparing a new financing round.

Pfeil: Finding investment for a consumer hardware startup was challenging at first; but that has of course changed with the market verification given by our successful crowdfunding campaign that has raised $1.25 million.

Pfeil: We sell cameras. We also plan to offer additional services for professional users on our panorama platform.

SUB: What are your goals for Panono over the next year or so?

Pfeil: We will finish the development, manufacture the camera and deliver it. 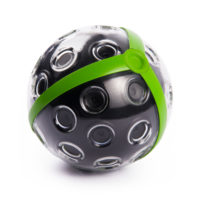