A Q&A with Resource Guru co-founder Andrew Rogoff. The London-based startup, which offers a cloud-based employee scheduling application, earlier this week announced the completion of an $870,000 Seed funding round, led by Index Ventures. It was founded in 2011 by Rogoff and Percy Stilwell.

Rogoff: Resource Guru is cloud-based team scheduling software. It’s a little-known fact that thousands of companies all over the world use team scheduling systems that don’t satisfy their needs. Many use nothing more sophisticated than a spreadsheet, while others use bloated, clunky, or expensive solutions—frequently leading to inefficiency and frustration.

Resource Guru helps companies get big picture visibility of their teams. It has a simple drag-and-drop interface that makes it really easy for people to manage their team schedules. It also features powerful reports that provide companies with insights into utilization rates and help with capacity planning. It’s a user-friendly tool that increases productivity and enables better collaboration online.

We have a number of unique features like our availability bar and clash management engine, but our primary innovation is the user experience. When we designed Resource Guru, there was no reference point—apart from the spreadsheets people were using. We started from scratch and re-thought the whole process. We spent a huge amount of time designing the user interface and agonizing over the details. It’s this interface and the way the app works as a whole that makes us unique. It’s the simplest, most user-friendly team scheduling tool on the market.

Rogoff: Most of our customers are from the creative services industries—digital, marketing, advertising, etc. But that’s probably because that’s the background of me and my co-founder. We also have customers from a huge range of other sectors, including software, TV and film, telecoms, engineering, education, etc., etc.

We have an impressive list of customers, including Saatchi & Saatchi, Vodafone, Intel, Roche, ASOS, and National Geographic Channel. In addition to these huge companies, we also have a large majority of smaller- and medium-sized companies. We even had an individual freelancer sign up the other day who wanted to use it to prevent herself from being over-booked.

SUB: Who do you consider to be your competition, and what differentiates Resource Guru from the competition?

SUB: You just announced that you’ve raised $870,000 in new Seed funding. Why was this a particularly good time to raise more outside funding?

Rogoff: It wasn’t. We actually started looking for the funds in the middle of a recession, so we were worried about whether we would find it or not. There was also a Series A crunch going on. It was a long road—about a year—but we couldn’t have found a more perfect investor to work with than Index Ventures. They have backed some fantastic companies, including Dropbox, Etsy, Nasty Gal, and SoundCloud.

Rogoff: We have a very vocal customer base who have been providing us with lots of feedback about features they would like us to develop. We are currently a very small team, so we decided to accelerate this development and hire some new engineers. This should help us evolve the product more rapidly and bring more joy to our customers, which is our ultimate goal. We will also be ramping up our marketing in the coming months.

SUB: What was the inspiration behind the idea for Resource Guru? Was there an ‘aha’ moment, or was the idea more gradual in developing?

Rogoff: I worked as a digital producer and project manager for many years in London. For quite a few of those years I worked as a freelancer, so I got to see how lots of different agencies operated. One thing nearly all of them seemed to have in common was that they used a clunky old spreadsheet for resource scheduling.

On one contract, I found myself back at an agency called Euro RSCG KLP, working with a friend called Percy Stilwell. They were also using a spreadsheet and Percy and I started discussing what a nightmare it was. So, we decided to look for something better—surely someone had developed an app that solved the problem? We searched and searched but couldn’t find anything that solved the problem. We were expecting to come across a Basecamp-style web app that would be easy to sign up to and have a low monthly fee, but we just couldn’t find anything decent. So, I think Percy said: “We should just build it.” I was thinking exactly the same thing, and had always wanted to escape the nine-to-five rat race working for other people, so it was an instant deal. Let’s just say it turned out to be much easier said than done.

Rogoff: One of the first things Percy and I had to do was wean ourselves off the salaries we both needed to survive. So, I went freelance, which freed up around five extra months per year for me to work on the business. Percy stayed in his job for a while longer but worked in the evenings and on weekends. While we both had lots of experience of delivering web projects, neither of us were developers. I had some coding experience, but wasn’t capable of developing an app like Resource Guru myself. So, we knew we would need some investment—hello friends and family. We managed to raise $273,000 to kick things off.

In the meantime, solving the resource scheduling problem with a simple, elegant app was turning out to be a harder nut to crack than we first thought. We spent months brainstorming, prototyping and running usability tests before we came up with the app we have today. We also met with lots of people in our target market who gave us invaluable feedback and also confirmed the need. The next big job was to find people to actually build it.

We knew that finding the right developers was going to be one of the biggest decisions we would ever make. So, I decided we needed to do some extensive research and go through an RFI/RFQ process. This type of thing is not fun—neither for the suppliers nor for the person doing it. I dreaded it, but for me, it was essential. I needed to be absolutely sure that we found developers who knew their stuff and had the right attitude. We started with around 45 candidates and eventually narrowed the list down to Platform45. The hard research paid off and we ended up with a fantastic team. I actually blogged about the process.

Rogoff: While we were working on the idea, we were continuously brainstorming ideas for the name. We came up with hundreds of candidates. We had some criteria that it needed to meet—it had to be memorable, a little bit quirky, have a domain we could register and not infringe any trademarks, obviously. The name just popped into my head one day and Percy liked it. It’s also partly descriptive, which helps when it comes to SEO.

Rogoff: Not at the moment, but it is definitely a possibility.

Rogoff: Designing the product itself was a huge information architecture challenge. It may look like a simple calendar-based product, but it’s actually unlike any other calendar you may have seen in the past. There was a lot to consider and it was extremely difficult to keep it simple and user-friendly.

The next most challenging thing was raising the new funds. It was extremely time consuming and very frustrating at times. The whole process took us around a year and was very distracting.

Rogoff: Resource Guru is a subscription product and we charge a very reasonable monthly fee for access to the service.

SUB: What are your goals for Resource Guru over the next year or so?

Rogoff: Our primary goal is to continue enhancing the product. To do that, we will be growing the team. We are currently looking for two software engineers. 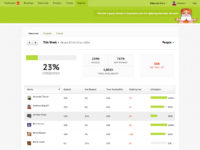