Longaccess wants to give consumers a more secure and reliable way to archive data, long-term

A Q&A with Longaccess founder and CEO Panayotis Vryonis. The Athens, Greece-based long-term data storage startup last week announced the completion of a new, €300,000 Seed funding round from existing investor Openfund. It was founded in 2013 and previously raised €210,000 in initial funding.

Vryonis: Longaccess is a safe deposit box in the cloud. It offers a long-term and secure solution for digital data. The idea was quite simple and you could say that it was a result of me becoming a father. You know how it goes nowadays—we take so many photos and videos of our children. At some point I started wondering whether all those recorded memories would be available for my daughter to see in the future. What if I deleted the family blog, what if a hard drive failed?

That’s how Longaccess started—secure, client-side encrypted data using AES 256 with randomly generated keys; long-term—pre-paid for 30 years—storage service; designed to be accessed by the uploader and other authorized parties in the decades to come.

BigStash came after. The feedback we got about Longaccess was that many of our potential users were looking for something much simpler. BigStash is a simpler solution, a place for all the stuff you don’t want to get rid off but you would also prefer to put somewhere else so that they don’t eat up your space. If Longaccess is the equivalent of a safe deposit box in a bank for your data, BigStash is your attic.

Vryonis: With Longaccess, our target market is individuals who are interested in preserving important data for them, or even for their family and friends. For example, the video of the first time I hold my daughter in my hands is extremely valuable for me, and I’d like to think that she will be able to find it when she’s old enough to care about such things 20-or-30 years from now, even if I’m not around.

BigStash is a great solution for people with quite a lot of files like video and photography—you know, footage that is important to keep somewhere but you won’t immediately need. Even though we initially thought people like photographers and video producers would love the service, we realized that the list is a lot longer. Video bloggers, gamers who record their gameplay, people who use a GoPro camera—it just goes on-and-on. Personally, I’m a bit of a data hoarder—I archive things I wouldn’t like losing, like the first podcasts I listened to that became the soundtrack of my life back in 2004-to-2005. I also use BigStash as my backup ebook library—I like to archive every ebook I download. And of course, I save family photos and videos, old projects I haven’t touched for years, etc.

SUB: Who do you consider to be your competition, and what differentiates Longaccess from the competition?

Vryonis: Well, both Longaccess and Bigstash are not syncing solutions, they are archiving solutions. In the past you’d put your photos on a CD and just place it on a shelf somewhere. That’s where we come in. As the size of data generated by consumers and professionals is growing exponentially, archiving is becoming an important problem with complexities not addressed by current cloud storage solutions. We believe that demand for archival storage from households and professionals will eventually outgrow that of cloud storage designed for frequently accessed data, and we intend to be the best at it.

SUB: You just announced that you’ve raised €300,000 in new Seed funding. Why was this a particularly good time to raise more funding?

Vryonis: In 2013, we started as a team of three and initial capital of €110,000. This allowed us to develop the product further and learn a lot from our first users. Now, we had to grow our team and invest in marketing. This was the right time for us.

Vryonis: We are only a few days after the launch of BigStash, but so far everything is going better than planned—we reached 10,000 users in less than a week! Which, obviously, makes us more than happy, but is also an indication we may have to raise more funds earlier than we expected if we are to keep up with growth.

Vryonis: Long-term thinking is a difficult problem, because it’s outside the human scale, by definition. On the other hand, people, especially when they become parents, like to plan and think in terms that extend beyond their own personal time scale.

I’m a big fan of the Long Now Foundation. Inspired by their name, we came up with ‘Longaccess’ to convey a service that allows long-term preservation and access to data.

As for our logo, it is inspired by the Bowhead Whale—a whale that can live more than 200 years.

Vryonis: I think we are a typical startup in this aspect—the biggest challenge is finding the right people; people that can help the company grow from employee zero to fifty. They are the kind of multi-talented people that are overqualified for what you need to do in the first steps, but are willing to create something from nothing, pull the company to their level, and then grow with it. Well, challenge accepted!

Vryonis: Our model is simple: Have a great service users are willing to pay for. Both Longaccess and BigStash plans are priced according to storage space allocated. Right now, we offer 5 TB free for one year to new BigStash users, but we consider this a marketing cost, not a long term pricing model.

SUB: What are your goals for Longaccess over the next year or so?

Vryonis: We are putting all our efforts in improving BigStash, and getting traction. Cloud storage for consumers is a crowded space with very tight profit margins—we have to be extremely good, extremely efficient, and grow fast. Our target is to reach one million users in the next 12-to-18 months. 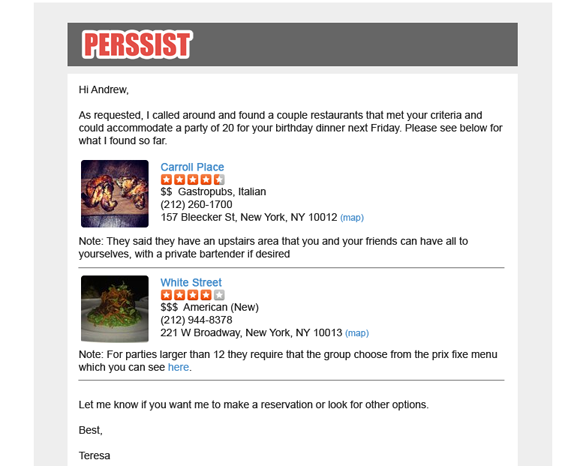 Wish you had a personal assistant? Just-launched Perssist wants to make it a (virtual) reality for anyone 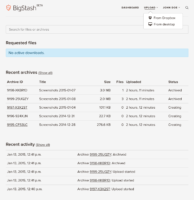 Longaccess wants to give consumers a more secure and reliable way to archive data, long-term